The basic tenets of the Arts and Crafts Movement emphasized the honesty of materials, simplicity, utility, and highlighted nature as inspiration. At a time when the fashionable world was beginning to reject Victorian excess, Arts and Crafts designs emphasized quality craftsmanship that featured natural elements and motifs. Aesthetic ideas were borrowed from ancient Egypt, Medieval and Renaissance Europe, and Islamic sources, as well as Japanese, Chinese and Native American designs. The work of Arts and Crafts designers and artists included architecture, print, home furnishings, wall paper, wood carving, metalwork, stained glass, ceramics, jewelry, textiles, and more.

The American Arts and Crafts movement placed more emphasis on good design for the masses, with less focus on the individual craftsman that was typical in England. In the U.S., the social aspects that were prevalent in England manifested in a small way through a few Utopian communities, such as Byrdcliffe Arts and Crafts Colony outside Woodstock, New York, and the Roycroft Community near Buffalo, New York. These attracted a variety of craft workers and artists, including printers, bookbinders, furniture makers, ceramicists, textile designers, metalsmiths, and leather smiths. Roycroft was founded in 1895 by Elbert Hubbard (1856-1915) who was inspired by William Morris’s Kelmscott Press in England and, with the assistance of his wife Bertha Crawford Hubbard (1861-1946), founded his own printing press in America, the Roycroft Press (aka The Roycroft Shops.) By 1905 the Roycroft society operated their own factory, farms, banks, and blacksmith shops, as well as a book bindery and furniture shop. The original Roycroft “campus” was comprised of fourteen buildings and attracted a group of almost 500 artisans by 1910. Instrumental in the Roycrofters’ success was Hubbard’s second wife, noted suffragist Alice Moore Hubbard (1861-1915) who managed many aspects of the artistic community.13 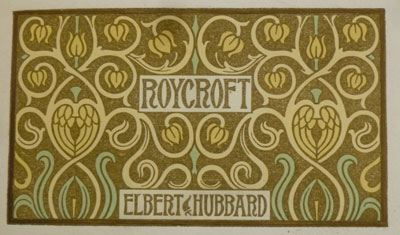 So here then are the preachments entitled The city of Tagaste; and, A dream and a prophecy. Roycroft Print Designed by Elbert Hubbard, Roycroft Shop(1900); MU Special Collections and Rare Books, University of Missouri

Gustav Stickley (1858-1942) also developed an artisan community, Craftsman Farms, in New Jersey in 1904. Organized like medieval guilds, Craftsman Workshops set out to improve American taste through the creation of “craftsman” furniture designs governed by simple lines, honest construction and quality materials. After travelling to Europe in 1895 and 96 where he was introduced to the English Arts and Crafts and French Art Nouveau styles, Stickley embraced many ideas of the Arts and Crafts movement and began applying its concepts to his furniture business. His experimental “New Furniture” line was a radical departure from furniture of the decorative Victorian era, comprised of “unadorned, plain surfaces enlivened by the careful application of colorants; structural qualities emphasized through exposed mortise and joinery; handmade qualities emphasized through the use of hammered metal hardware in bright, polished iron or patinated copper”14. Stickley described his furniture as “simple, well-made furniture, conceived in the spirit of true craftsmanship, designed for beauty as well as comfort, and built to last”53. Craftsman furnishings, fabrics, metalwork, leathers, and needlework were sold at retailers nationwide, including Emery, Bird, Thayer & Co. in Kansas City, Missouri, Lammert Furniture in St. Louis, Missouri, and Parker Furniture in Columbia, Missouri.

As demand for his products grew, Stickley became increasingly interested in every detail of the home environment. He believed that “the way a man’s house was planned and built [had] as much influence upon his family’s health and happiness as had the furniture they lived with. [His furnitings] suggested, by their sturdy build and friendly finish, an equally sturdy and friendly type of architecture. Thus was evolved what has since come to be known as Craftsman architecture”53. The houses he designed contained aspects of of country and suburban living, with features that linked the interior closely with the outdoors.53 Stickley desired to express his ideas of craftsmanship and homemaking in a broader medium, and in 1901, launched The Craftsman, an illustrated monthly pamphlet devoted to craftsman ideals. As circulation and interest increased, the pamphlet became a monthly magazine which, by its last year of publication in 1916, had become one of the definitive publications of the new American Arts and Crafts movement. “In as direct, authentic and beautiful fashion as I could, I have set forth what seemed the best and most representative work of artists, craftsmen, architects and other workers in significant fields, both in this country and abroad”53. 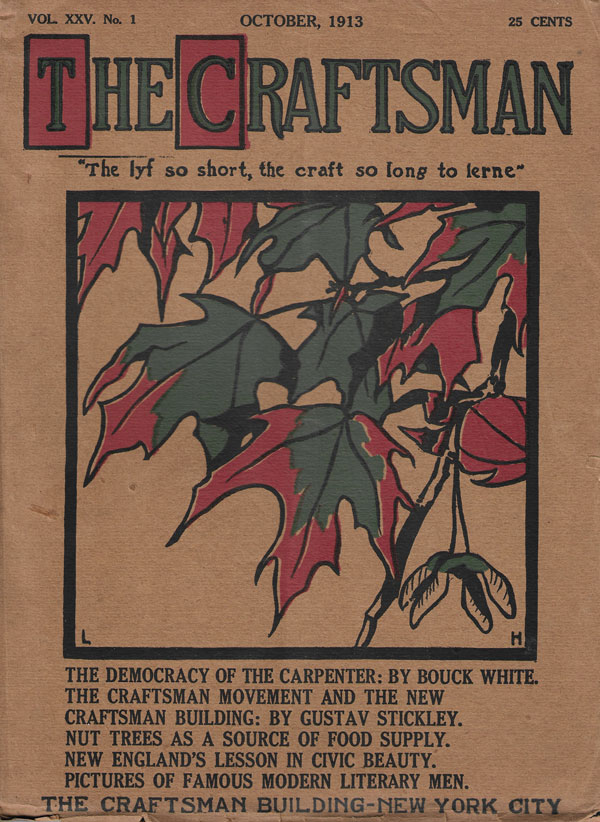 In England a similar artistic community was established to revive lost country crafts. Between 1896 and 1933 Haslemere Peasant Industries was a thriving community of craft workshops and weaving houses designed by noted Arts and Crafts architect Francis Troup (1859-1941). Godfrey Blount (1859-1937) and his wife Ethel Hine established the Tapestry House at Haslemere that specialized in embroidered appliques.12 The Blounts, along with Joseph King (1860-1943), a prominent educationalist and social reformer, and his wife Maude King (1876-1927), established the Haslemere Weaving Society.6 All were members of The Peasant Arts Society formed at Haslemere in 1897. Reverend Gerald Stanley Davies (1845-1927) of the Society traveled across Europe gathering examples of traditional peasant craft including woodwork, metalwork and textiles. Arts and Crafts woodworker Arthur Romney Green (1872-1945) joined Haslemere and the Society in 1901. “Ironwork, pottery, woodwork, fresco painting, hand-press printing, bookbinding, plasterwork, and carving were all produced at Haslemere, but textiles were by far their most important crafts”46. 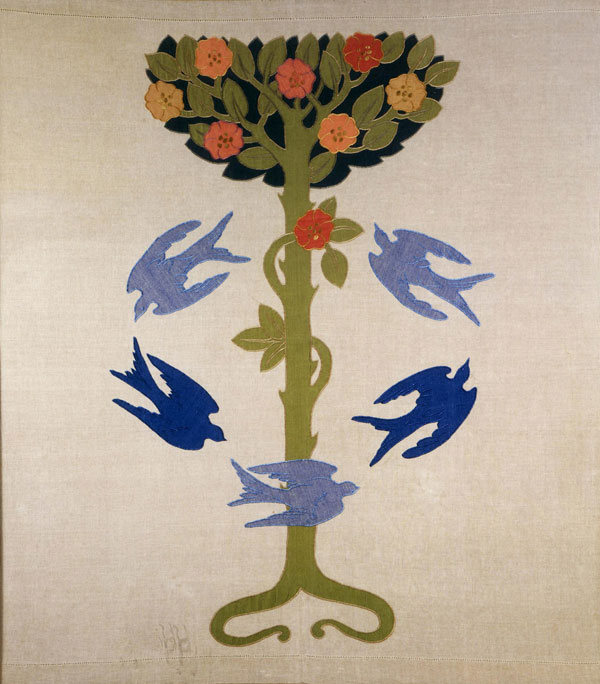 The Spies Handwoven Linen Hanging with Linen Appliqué Designed by Godfrey Blount and Made at Haslemere Peasant Industries(1896); © Victoria and Albert Museum, London

The aim of the artistic community was to create a “Rustic Renaissance” and “revive a true country life where handicrafts and the arts of husbandry shall exercise body and mind and express the relation of man to earth and to the fruits of the earth”6. The Arts and Crafts movement played a significant role in the designs produced. Troup also designed the Green Bushes Weaving House at Haslemere which was directed by resident artist Luther Hooper (1849-?) whose hand-knotted carpets and hand-woven silk panels were exhibited at the 1906 Arts & Crafts Society Exhibition. Hooper also wrote a number of influential books on weaving that are still in print today including Handloom Weaving: Plain and Ornamental, Silk, Weaving for Beginners and Weaving with Small Appliances. Both Blounts were also committee members of the Healthy and Artistic Dress Union discussed in Dress Reform.

“Although the perception of Arts and Crafts history is to the contrary, women designers guided this grassroots Arts and Crafts Movement for nearly two decades before the movement’s major male figures arrived.”

– Catherine Zipf, The American Arts and Crafts Movement and its Women Practioners18

Similar socialist and reform efforts developed at the community level, frequently in the form of educating young women. Schools and training programs made tools and communities more accessible to women and played a key role in an attempt to redefine women’s relationship to work in an era when they frequently labored long hours in factories.1 American Arts and Crafts practitioners formed an early grassroots movement of schools, clubs and other organizations in which women were fundamental. Paul Revere Pottery in Boston grew out of the Saturday Evening Girls club, a reading group to aid immigrant girls. Newcomb Pottery in New Orleans was established in 1894/5 as part of the H. Sophie Newcomb Memorial College for women. Here, young women designers first created pottery and later created textiles.

This early generation of women designers believed that art could proactively generate change and by the mid-1880s, their efforts aided an expansion in Arts and Crafts production. As Catherine Zipf states in The American Arts and Crafts Movement and its Women Practitioners, “although the perception of Arts and Crafts history is to the contrary, women designers guided this grassroots Arts and Crafts Movement for nearly two decades before the movement’s major male figures arrived”18. “Women were encouraged to participate in decorative arts and at the same time, they were deprived of fine art education that was reserved for the male members. On one hand, women were encouraged to participate, as craftwork was seen as an extension of their traditional roles. On the other, their work remained under-recognized because women were considered executants of the designs created by men, rather than talented creators themselves. Two influential Arts and Crafts guilds, Guild of Handicraft and Art Workers’ Guild, excluded women from their membership”43.

Social settlements also formed in response to problems created by urbanization, industrialization and immigration, and many promoted practices of the Arts and Crafts movement. By 1900, the U.S. had over 100 settlement houses.1 The English Settlement movement influenced Americans Jane Addams (1860-1935) and Ellen Gates Starr (1859-1940) who founded the world famous social settlement known as Hull-House in Chicago in 1898. Residents provided schooling and day care for working mothers, libraries, theater, and art and music classes. As a devotee of John Ruskin and William Morris, she studied hand bookbinding in England under the master craftsman T.J. Cobden-Sanderson (1840-1922). She returned to Chicago in 1898 and established the Hull-House bookbindery where she taught others the art of bookbinding. Starr also worked with other Hull-House residents to improve the life and working conditions of the local community. In her 1895 essay on “Art and Labor,” Starr argued that, “the only hope for the oppressed was to eradicate the conditions of life that stifled the creative and aesthetic response”41.

The Chicago Arts and Crafts Society was founded at Hull House by Ellen Gates Starr in 1897; Jane Addams and architect Frank Lloyd Wright (1867-1959) were original Society members. Chicago was a leading center of the Arts and Crafts movement where a concerted effort was undertaken “to integrate art, education and labor, and make them more expressive of the nation’s democratic and industrial life”15. Unlike the movement in England, they promoted the machine as a way to assist workers. One of the movements main philosophers, author Oscar Lovell Triggs (1865-1930), made Chicago his home as an instructor at the University of Chicago, editor of the “Bulletin of the Morris Society of Chicago” and founder of the Saugatuck Press.16 Chicago also attracted many important voices of the Arts and Crafts movement as speakers, including influential reformers like Walter Crane, president of London’s Arts and Crafts Exhibition Society, and British architect and designer Charles Robert Ashbee (1863-1942) a significant figure in British artistic and cultural life who founded his own craft workshop in London in 1888 called the Guild of Handicraft.17

While the Arts and Crafts philosophy united the head and the hand in small artisan communities such as those previously described, manual training schools in America democratized this philosophy by taking it to the masses. One example was the St. Louis Manual Training School founded in 1887 by Dr. Calvin Woodward, dean of the Polytechnic School at Washington University in St. Louis, Missouri. Woodward’s idea to was “to develop an educational curriculum that taught industrial arts as a general, liberal education. Students divided their time almost equally between traditional academic instruction and instruction in such areas as patternmaking, wood turning, and iron forging.”2 By supplementing a liberal education with manual activities, Woodward believed the student would unite his head and his hand, epitomizing the Arts and Crafts ideal.