Timely Response Collecting was introduced by the MHCTC in 2017 as a new type of collecting activity. Contemporary objects are acquired in response to major moments in recent history, visually linking clothing and design to important social, cultural, environmental, and political happenings in the United States. These objects document historic circumstances as they happen, a strategy that preserves relevant clothing and textile artifacts for future scholarship and exhibition. If you own an example of this type of item you would like considered for preservation, please contact Nicole Johnston at johnstonnr@missouri.edu or (573) 884-5001.

The apparel brand Alice + Olivia collaborated with the Keith Haring Foundation to create a capsule collection that brought to life the legendary art of the late Keith Haring who began creating graffiti in New York City subways during the 1980s. Haring’s recognizable dancing figure was brought to life in patchwork collages and prints like the one above. Haring’s artworks, which included murals, paintings, and graffiti-inspired works in urban areas, famously helped fund children’s literacy projects as well as AIDS awareness initiatives. Haring himself died of AIDS in 1990 at the age of 31. In keeping with the artist’s philanthropic endeavors, Alice + Olivia added a social aspect to the Haring collaboration. People could share photos of their own art on Instagram, and with every post, the brand donated $1 to the Council of Fashion Designers, a not-for-profit trade association created to promote American designers in the global economy. 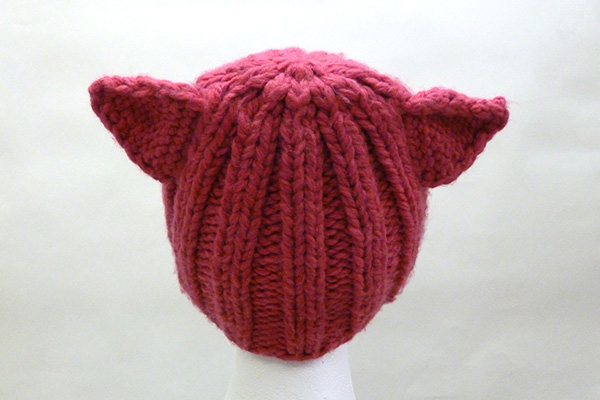 The first Women’s March, a worldwide event, was planned for January 21, 2017 with the goal to advocate for human rights – including women’s right, healthcare reform, and worker’s rights. Worldwide participation in the first marches was estimated at over 7 million. In connection with the march, The Pussyhat Project was a nationwide effort launced in November 2016 to create pink “pussyhats” to be worn at the marches. The concept was to create a “sea of pink,” a color traditionally associated with girls and women, to demonstrate solidarity for women’s rights, and to protest against the language used toward women and minorities in the 2016 election. 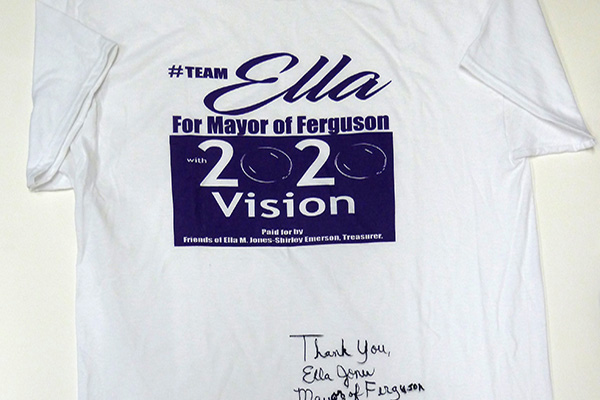 Mayor Ella Jones was elected as Ferguson’s first Black and female mayor in June 2020. She was one of several Black female first-time mayors elected across the country this past June. A Ferguson resident for over forty years, Jones graduated from the University of Missouri at St. Louis with a Bachelor of Arts degree in Chemistry. In 2015 Jones became the first African American on the Ferguson City Council, a year after the fatal shooting of Michael Brown by Ferguson police, an event that sparked nationwide protests. The event and subsequent unrest throughout the state and the nation influenced Jones’s decision to run for public office.

During spring 2020 MU’s Hacking Covid-19 Task Force created CAPR face shields to protect health care workers against airborne viruses. The cross-campus volunteer group and fabrication team consisted of the College of Engineering director of facilities Ron Monson; engineering technicians Matthew Marciniak and Ghassan Al Bahhash; and Damon Coyle of the MU School of Medicine’s Shelden Clinical Simulation Center. Five mask prototypes, four of which now belong in the MHCTC’s permanent holdings, were tested and 1,000 masks were made and assembled in the College of Engineering’s machine shop. 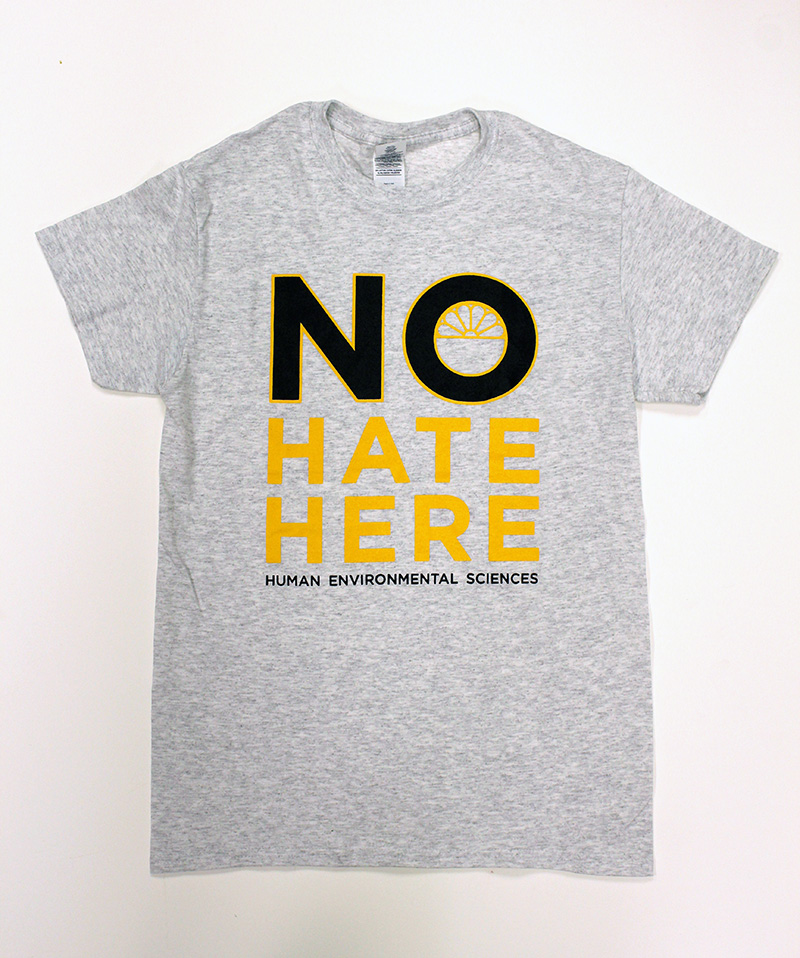 Ongoing incidences of racial discrimination and systemic racism at the University of Missouri led to the creation of Concerned Student 1950, a student group whose name reflects the first year Black students were admitted to MU. CS1950 led a mass protest and week-long hunger strike in 2015 which also involved the MU football team whose members refused to practice or play until the hunger strike was resolved. Protest efforts led to the resignation of MU System President Timothy Wolfe. This t-shirt was designed by HES staff in 2016 to show support for MU students and to promote diversity, inclusion and equity. 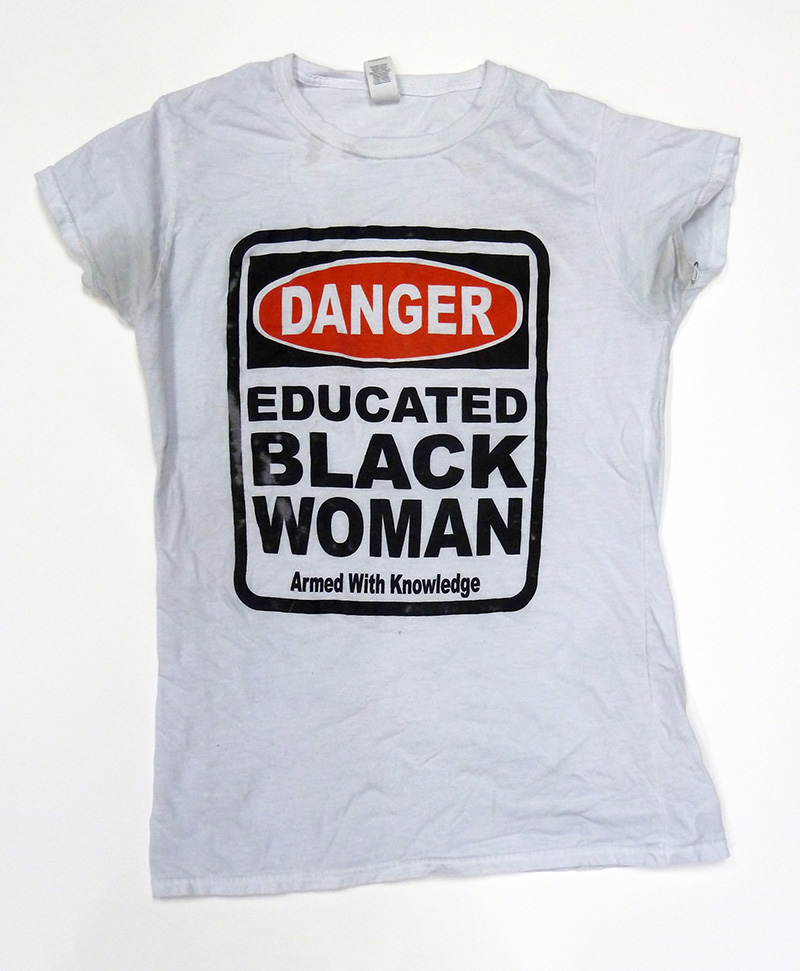 MU Senior Kaija C. wore this t-shirt as a coordinator of the student-led protest and solidarity march on May 31, 2020 that ended and began on the MU campus. As one of few black female students in MU’s College of Agriculture, Food and Natural Resources, Kaija recently discussed her personal experiences at Mizzou with President Mun Choi in response to #BlackatMizzou. These experiences, as well as growing up in the food desert of south side Chicago with a family member who participated in the American civil rights movement of the 1960s, motivate Kaija’s current activism. “I have nieces and nephews,” she expressed. “I have to leave them something.“ 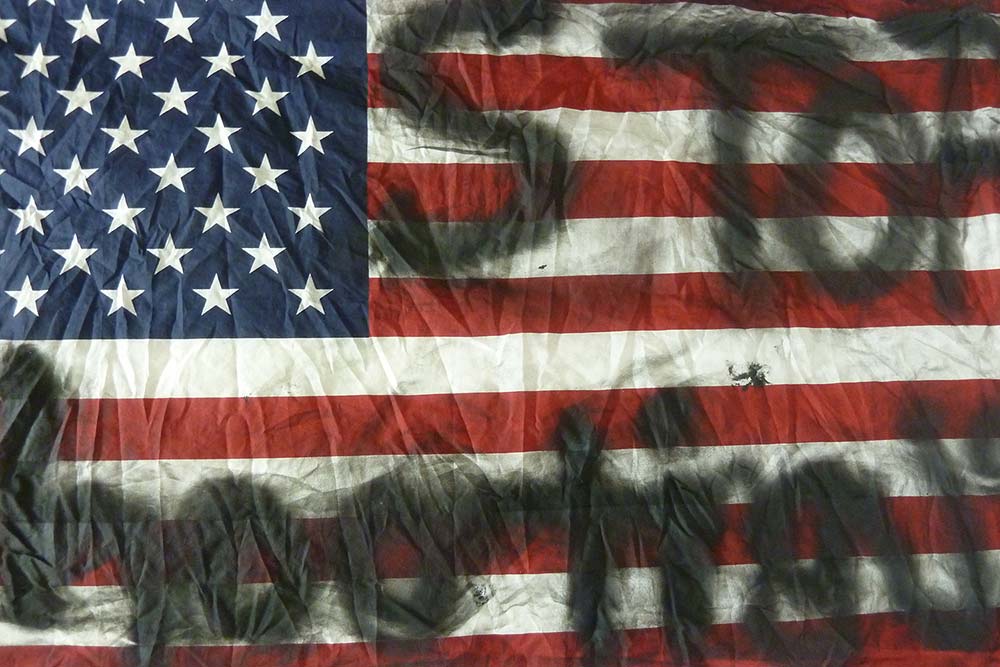 As a coordinator of the student-led MU campus protest and solidarity march on May 31, 2020, the donor used this American flag to visually communicate his support of the equal justice march that began and ended on the MU campus. This action was in direct response to the murder of George Floyd and the continuation of police brutality against Black people across the nation.

The path of the 2017 total solar eclipse passed directly over Columbia and the University of Missouri. Thousands of students, faculty, staff and community members gathered on the MU campus to celebrate the historic 2.5 minute-event. As the eclipse passed overhead, viewers shouted, sang, even cried, during this unique moment of unity. View KBIA’s video of the event captured by the Missouri Drone Journalism Program. Astrophysicist and former MU faculty member, Dr. Angela Speck, was co-chair of the national task force to prepare the U.S. for the total solar eclipse. Dr. Speck favored a light-up constellation skirt, now in MHCTC holdings, to promote eclipse events throughout the state. 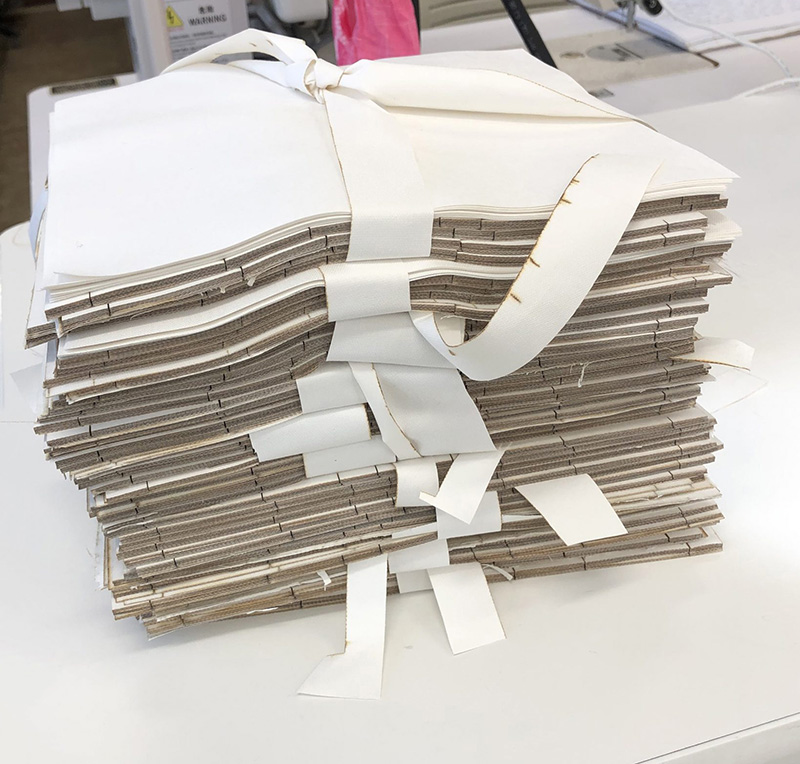 In spring 2020 staff and graduate students in MU’s Department of Textile and Apparel Management volunteered to cut over 35,000 face masks for MU Health Care patients. The fabric laser cutter in TAM’s Kellwood Sewing Lab was also used as part of this effort. A total of over 90,000 masks were made by individuals and businesses in the Columbia community. A pattern, sewing kit and completed mask were donated to the MHCTC for preservation. 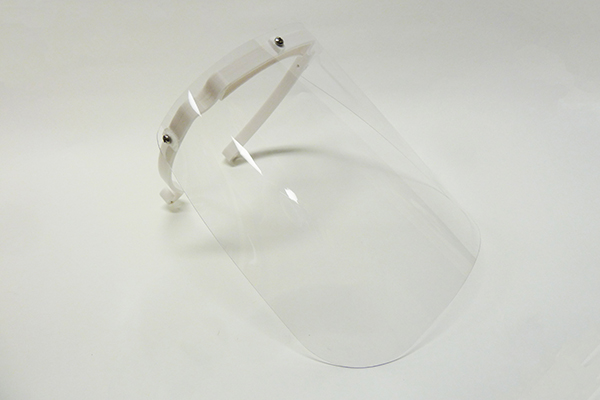 Days after MU President Mun Choi announced instructors would be required to wear face shields for in-person classes, MU’s College of Engineering began producing face shields for professors on campus. As of August 7th, 2,174 face shields had been completed for campus and the Columbia community. Faculty, staff and students came together to make the shields for Columbia Public Schools and MU faculty, as well as cuffs for [MU] hospital’s frontline workers. 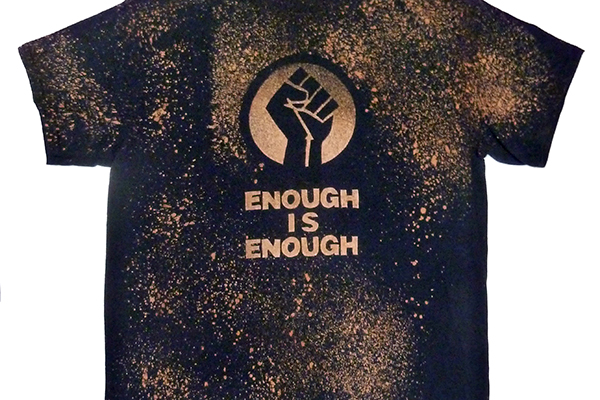 After becoming aware of Columbia’s social justice movement in 2020, MU Senior Kayla Hahn began attending protests downtown and on campus where she immediately noticed very few ways to visually identify participants without signs. In response, Hahn began creating her t-shirts and handing them out at events. Each hand-cut stencil design was pieced onto the shirt in combination with bleach splattering and spraying. Hahn describes her creations as her way of being “a part of history rather than just learning about it.” 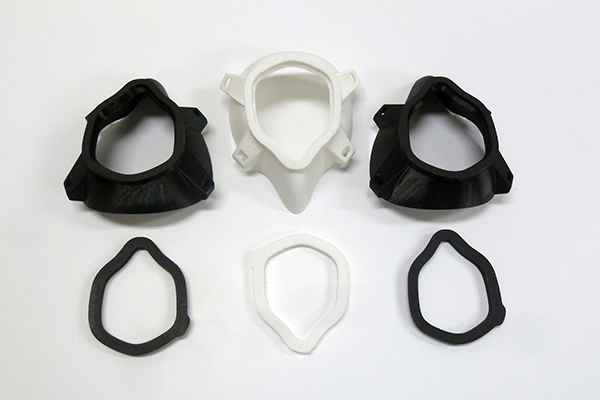 Gifts of A. Soni

Mizzou sophomore Anshul Soni printed about 35 N-95 masks as part of a group donated to southwest Missouri health and emergency personnel including Citizens Memorial Hospital, the local fire department, and law enforcement. Soni used an Ender 3 3D printer in his home, utilizing patterns and tutorials found online. Soni said his Mizzou education helped him with the project. “I had to learn on my own, and I think that’s one of the things that Mizzou really teaches.” Learn more about Anshul’s project in MU News.

COMING SOON! This t-shirt was designed by the HES Identity, Diversity and Equity Task Force for the final HES Week in 2021 prior to the University of Missouri’s restructuring of the College of Human Environmental Sciences. The newly-formed HES Inclusion, Diversity and Equity Task Force created a commemorative t-shirt for the very last HES Week of activities in June 2021 before the restructuring of the College of Human Environmental Sciences effective July 1, 2021. The reverse side of the shirt includes the statement, “A College so good, that everyone wants a piece of us” followed by a list of current HES departments. The front highlights three action words inherent to IDE ideology: Embrace, Empathize, Empower. A modified equal sign has replaced the letter ‘E’ in ‘HES’ as a means of visually connecting the college and IDE ideology, while at the same time, expressing equality for all who are a part of our college, our campus and global community.