Embroidery lent itself well to the Arts and Crafts ideal of “truth to material,” ushering in more naturalistic forms for patterns and embroidery. Simple forms of native flowers and plants accented dresses, shirtwaists, outerwear, hats, handbags, collars, and gloves, as well as household textiles and home accents. Harmonious embroidery could be achieved through the use of “perfectly frank and pure colors; reds… inclining to orange, blues inclining to green, yellows inclining to green or brown, blacks of a greenish or olive tone”35. 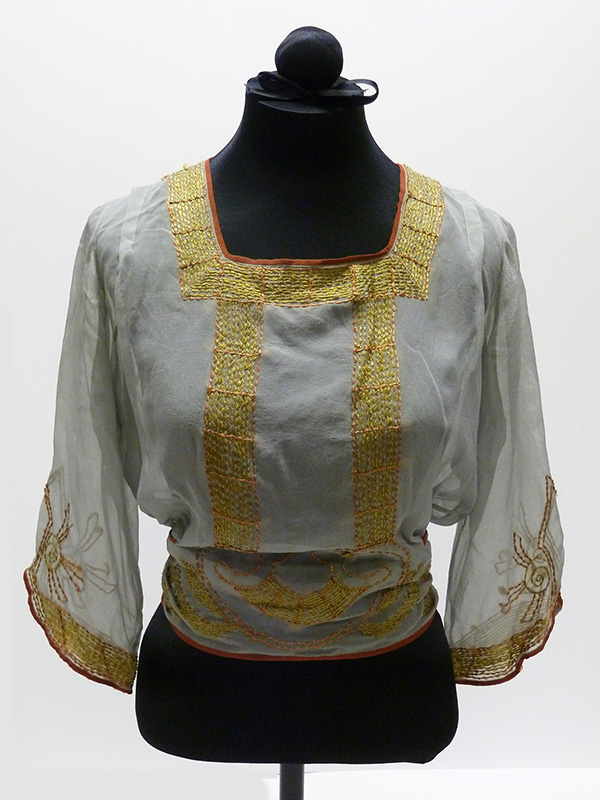 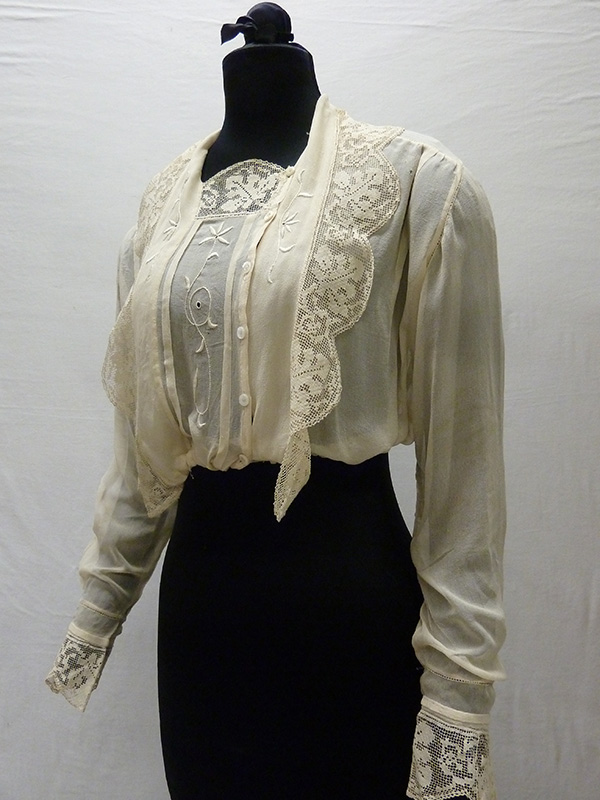 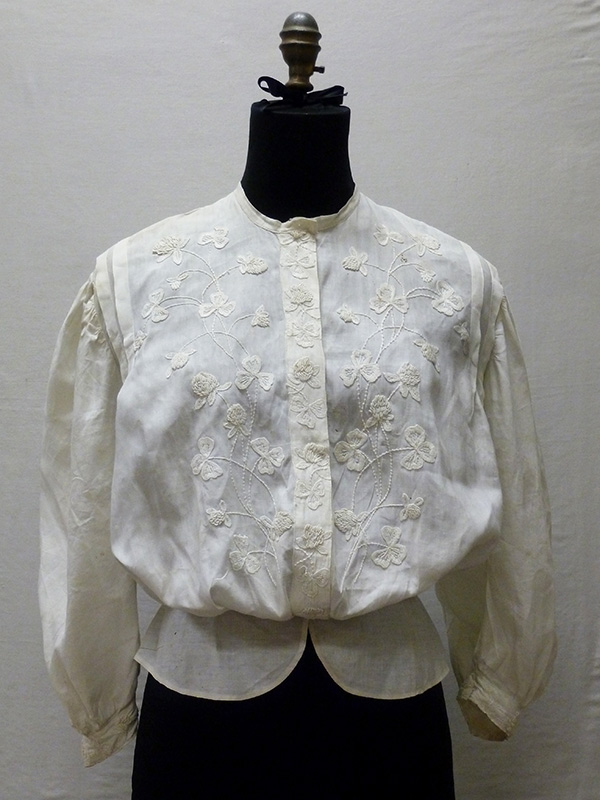 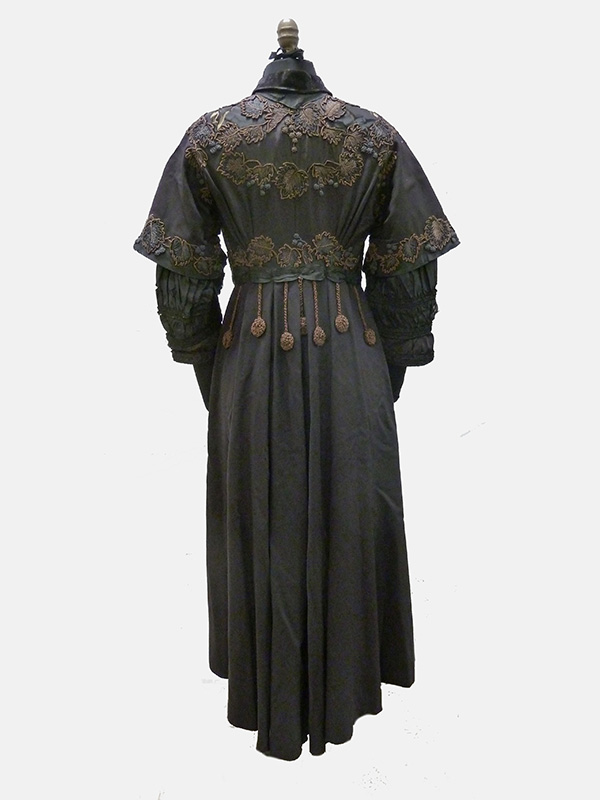 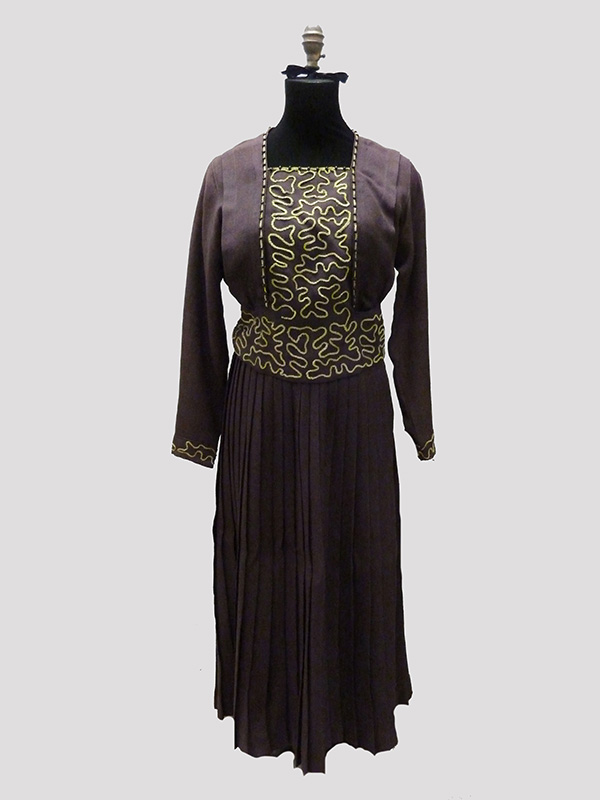 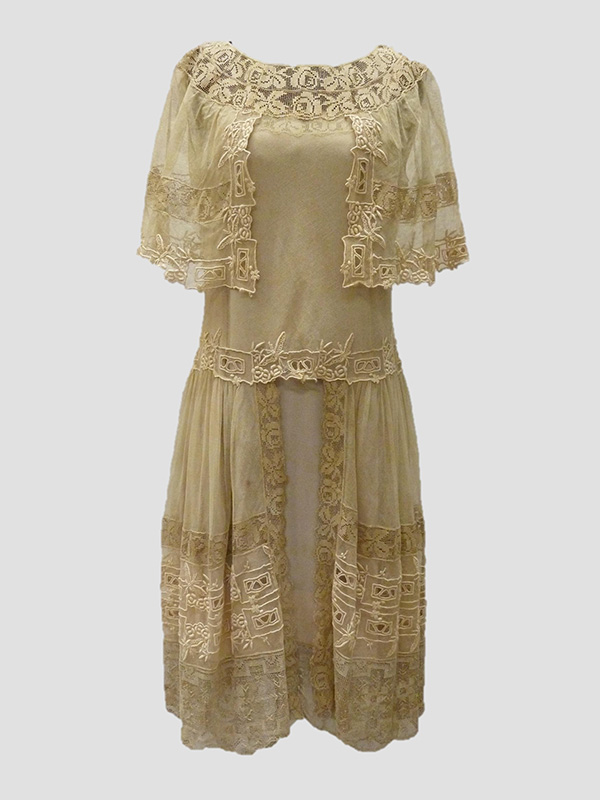 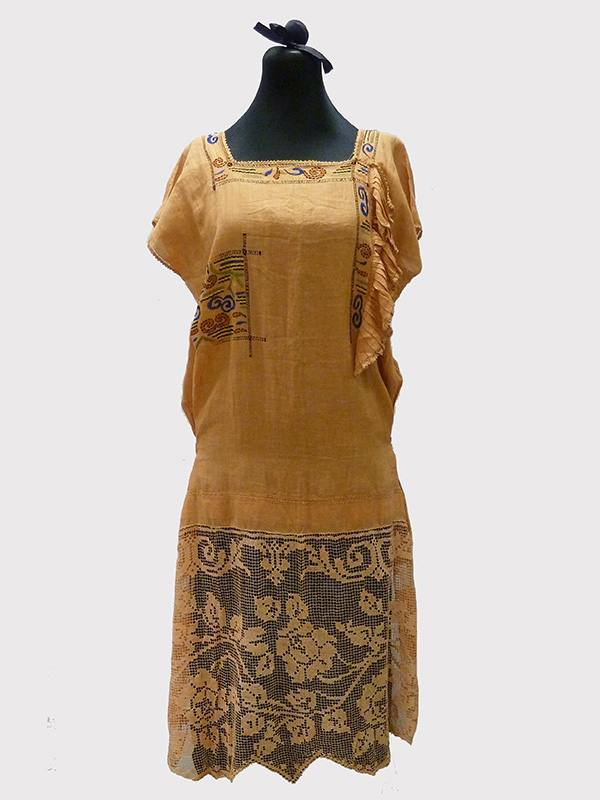 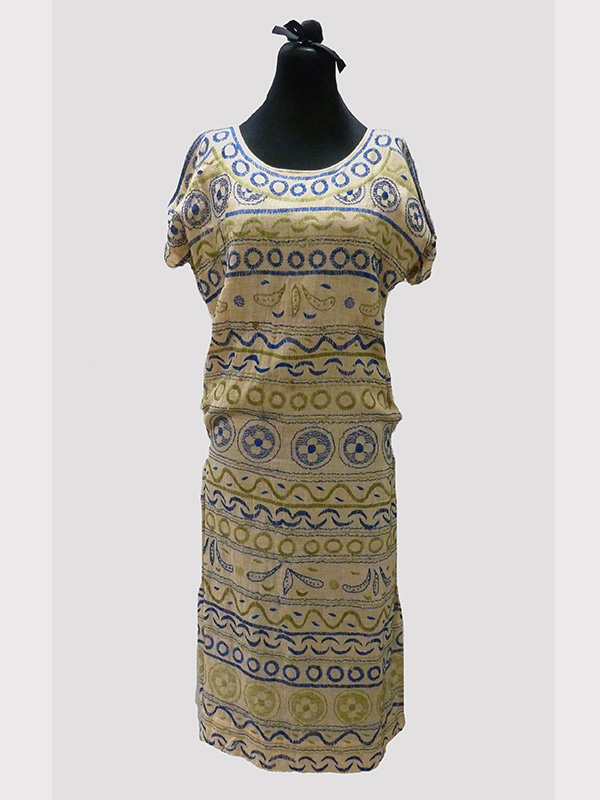 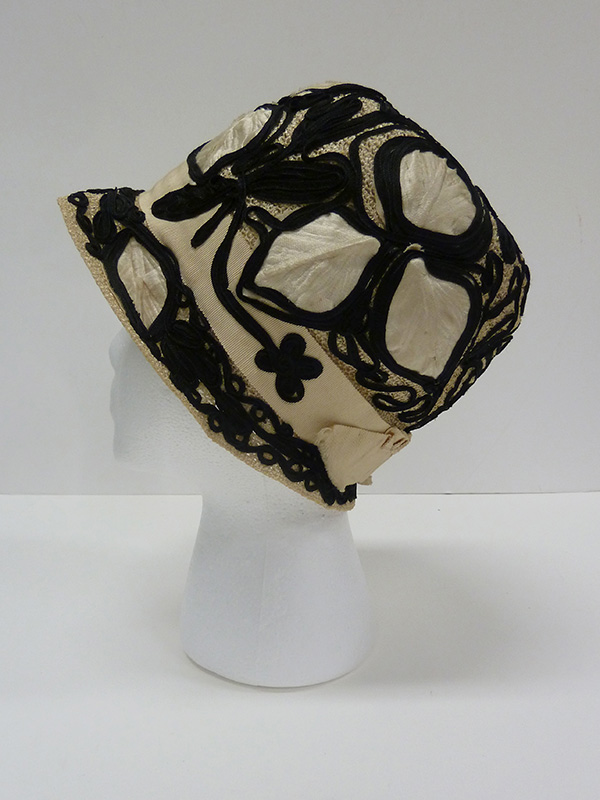 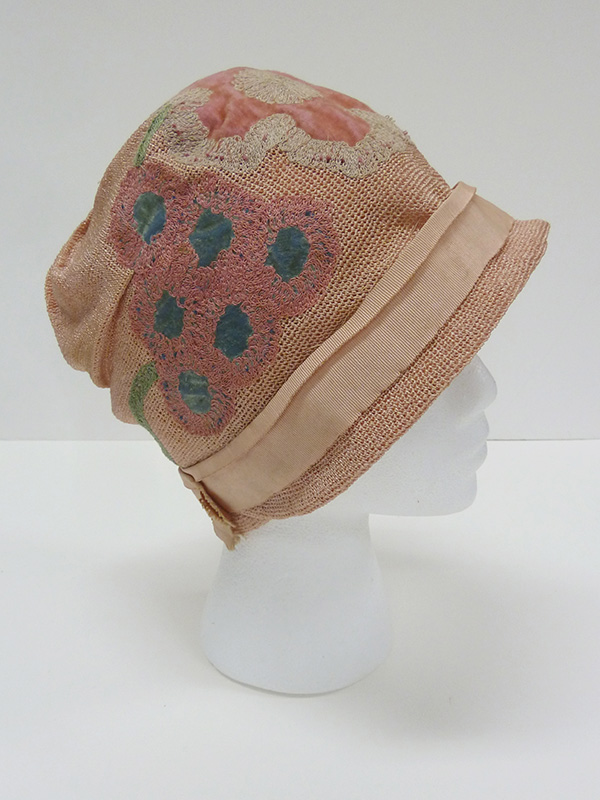 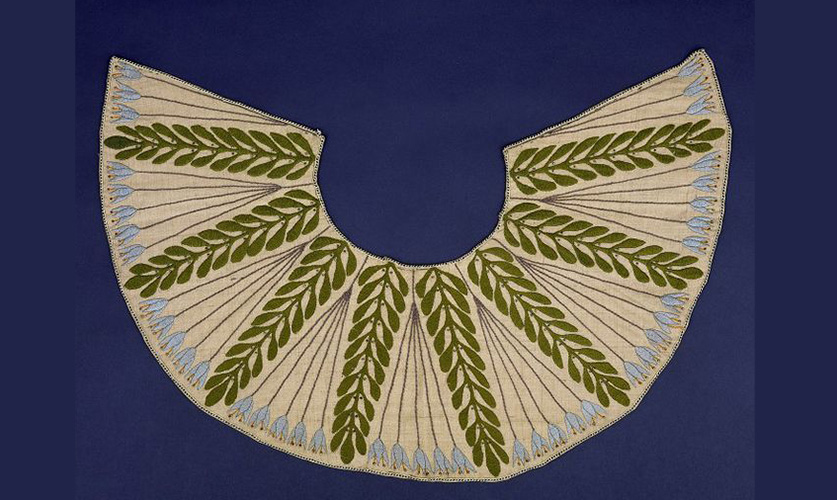 Other popular embroidery designs featured intricate, geometric and contemporary-looking shapes such as new styles that developed in the late nineteenth century at the Glasgow School of Art in Scotland. The Glasgow Style of embroidery influenced contemporary Western Arts and Crafts practitioners and remains influential into the 21st century. Jessie Newbery (1864-1948) was one of eight women students at Glasgow who established the Glasgow Society of Lady Artists in 1882, as women were excluded from existing established art societies throughout Scotland. She traveled throughout Europe collecting textiles from Italy, Russia and the Balkans and developing interest in mosaics, textiles, pottery, and ‘peasant crafts.’ She enrolled as a student at the Glasgow School of Design in 1884, becoming a teacher there Glasgow in 1888 and establishing the school’s Department of Embroidery. Newbery began a radical new course in ‘Art Needlework’ which introduced a whole new aesthetic and associated teaching standards.37 She sought to “teach embroidery in a modern manner for use on modern garments”27. Heavily influenced by the emerging style of the Glasgow School, Newbery supported the Arts and Crafts ethos that everyday objects should be beautiful and strongly believed that embroidery was an art form available to all social classes. Jessie Newbery was also influential in helping change society’s perception of female designers and artists. 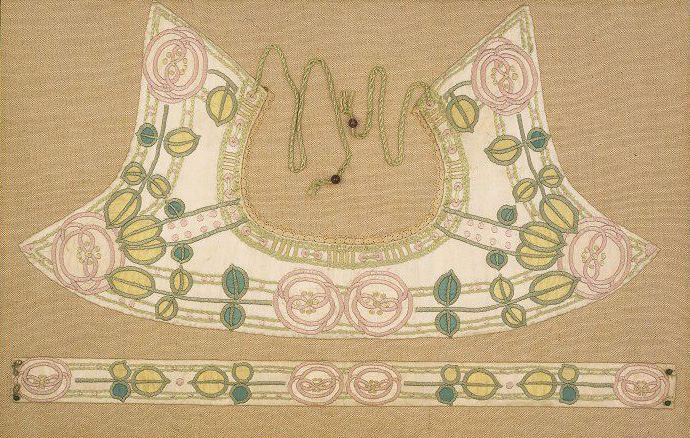 One of Newbery’s ‘most talented and subsequently most influential students’38, Ann Macbeth (1875-1948) became head of Glasgow’s embroidery department in 1908. Macbeth became a pioneer of modern embroidery, internationally recognized for her contribution to needlework embroidery.39 Her 1911 publication Educational Needlecraft with Margaret Swanson (1872-1942) who also taught embroidery at the Glasgow School of Art, promoted needlework to the wider community and was so successful in improving the standards of school curriculum, that it was was used in the Scottish primary education system into the 1950s.37 Macbeth also taught metalwork, bookbinding and ceramics and, as a freelance artist, produced designs for jewelry, carpets and textiles. 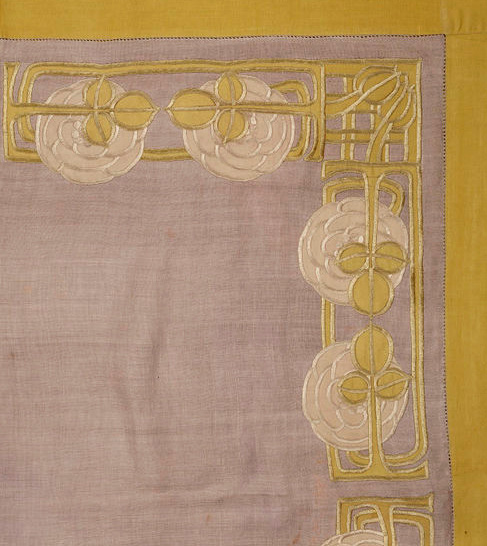 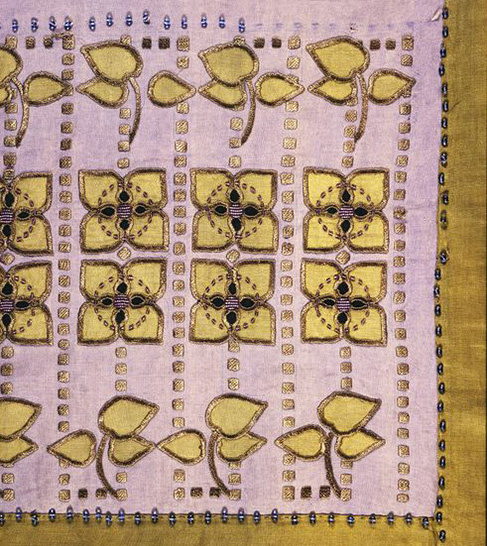 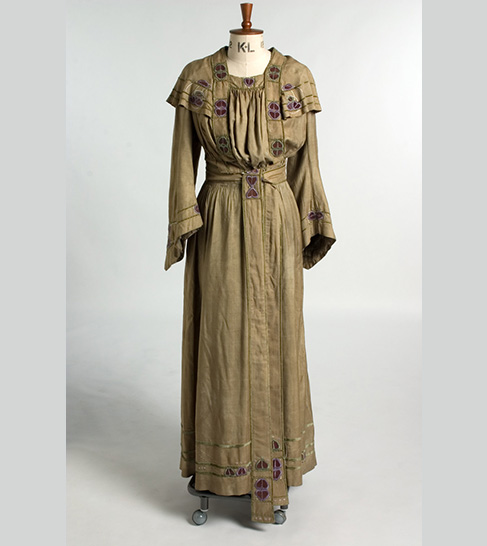 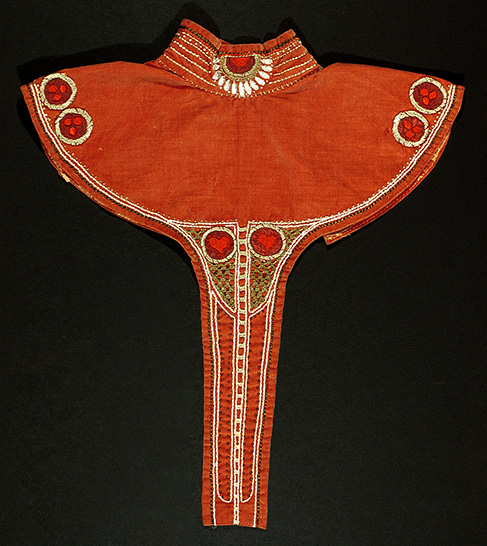 Beyond the appeal of embroidery as decorative art, embroidered fabric served a useful purpose in relation to textiles made for Arts and Crafts furniture. In her book Arts and Crafts Embroidery, Laura Euler states, “People like Gustav Stickley had a vested interest in promoting embroidery. His stark furniture looked more appealing when his tables had nice, long runners on them, or when his incredibly uncomfortable sofas were accented with soft cushions”20. In fact, Stickley actively promoted embroidery in his highly influential publication, The Craftsman, often featuring needlecraft patterns by notable architects and designers.

Despite these and other efforts by numerous Arts and Crafts textile designers, needlework remained a women’s household skill. Over the centuries, embroidery had become devalued as women’s work, taught to girls as part of their education in the household skills, not as an art. During the 1890s, however, a number of embroidery societies were founded to improve the design standards of embroidery, employ women, and sell finished embroideries. Their mission: restore the high stature of ornamental needlework in the decorative arts. Improvements in printing technologies aided this mission, spawning a proliferation of do-it-yourself women’s magazines and catalogs such as Needlecraft, Home Needlework and Modern Priscilla, all of which contained abundant varieties of embroidery patterns for pillows, table runners, decorative panels, dress collars, glove accents, collars and cuffs, laundry slippers, and more. Everything could be embroidered: beach pillows; lettuce bags; shaving paper pads, and more. Thread companies such as Richardson Silk Co. also published catalogs and kits for aspiring embroiderers. Needlework had become all the rage and was a means through which everyone could enjoy handicrafts, a key component of the Arts and Crafts mission. 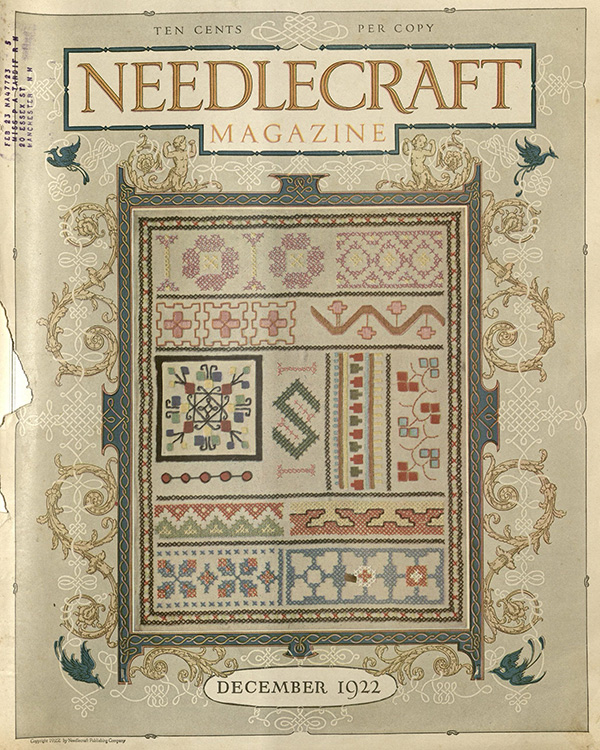 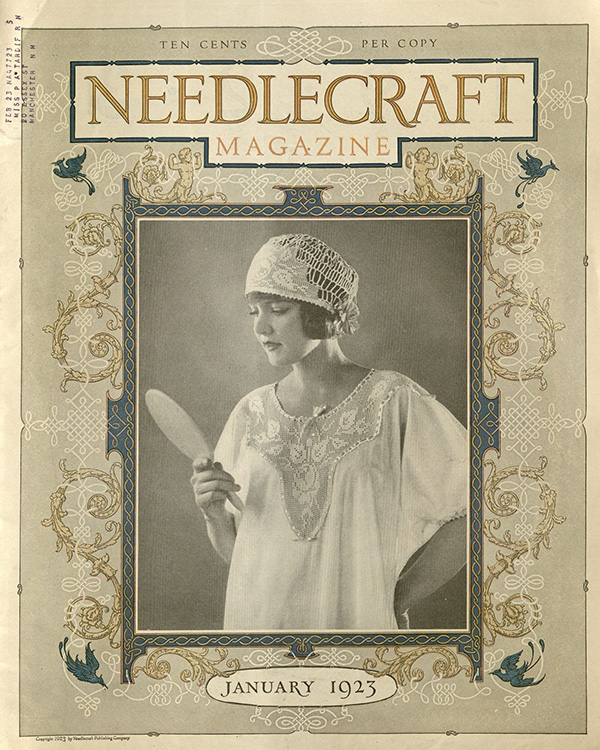 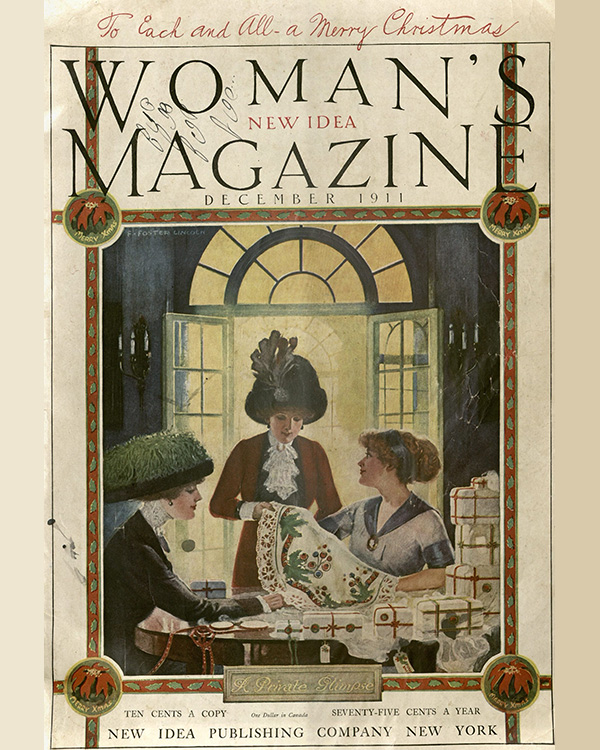 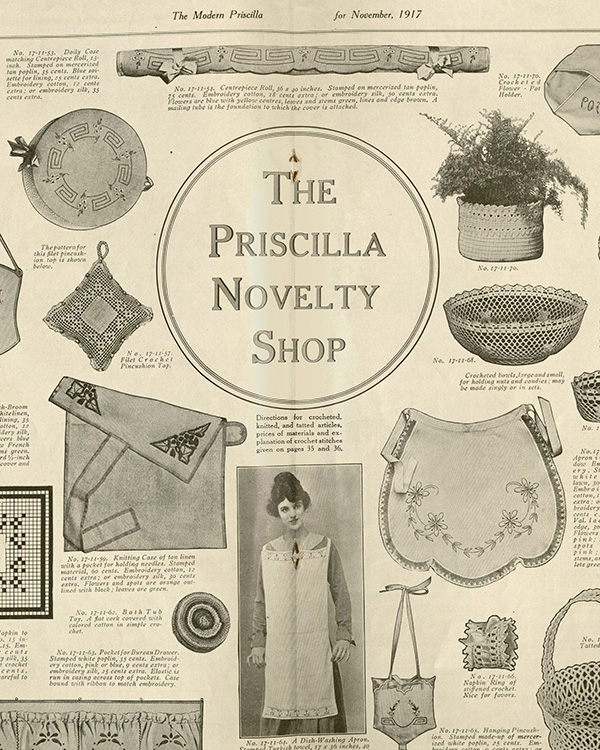 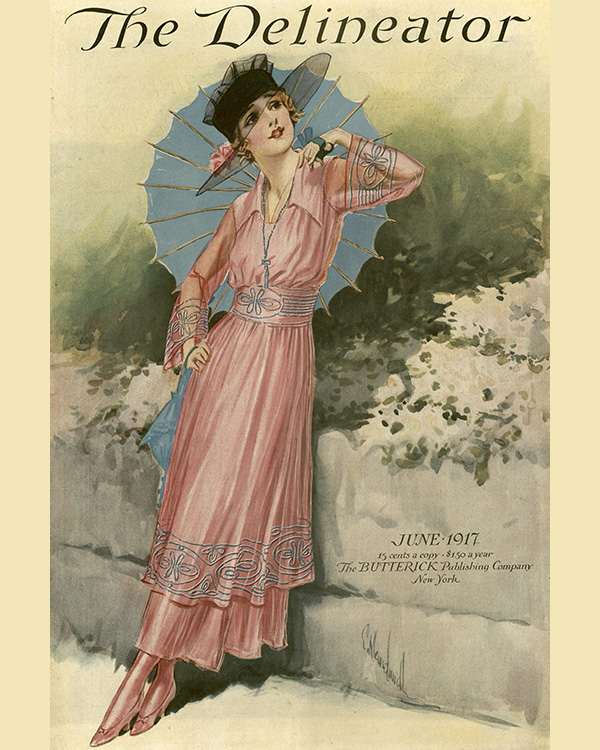 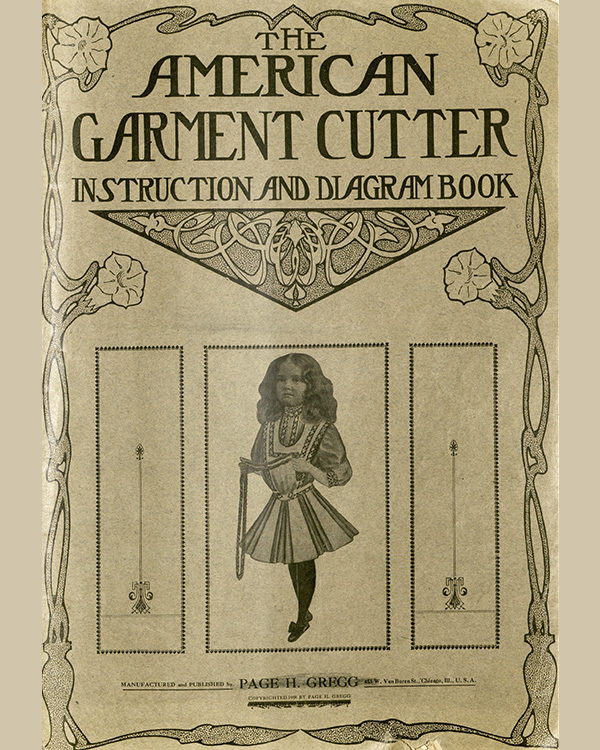 Silk companies profited tremendously from the needlework craze, producing not only embroidery threads and kits but also educational booklets featuring embroidery patterns and lessons. From about 1850 to 1930 the American silk industry was the largest in the world. The best known suppliers that produced Arts and Crafts designs included Corticelli, Royal Society, Brainerd & Armstrong, Belding Brothers & Company, and Richardson Silk Company.20 Richardson Silk Company was formed in 1887 by George P. Richardson (1850-1919), formerly of Belding Brothers & Company, and became the largest silk producer in the U.S. by 1920. Richardson advertised heavily in newspapers and women’s magazines. Art books offered embroidery guides and patterns such as the triple Lotus pattern #7014 pictured on the pillow below. Free embroidery instructions were provided through Richardson Art Embroidery Clubs which frequently met in the homes of established society matrons. 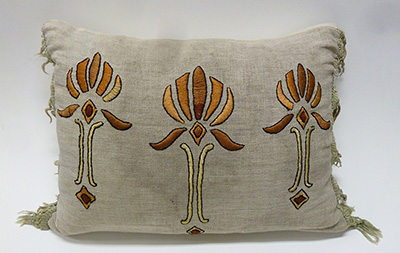 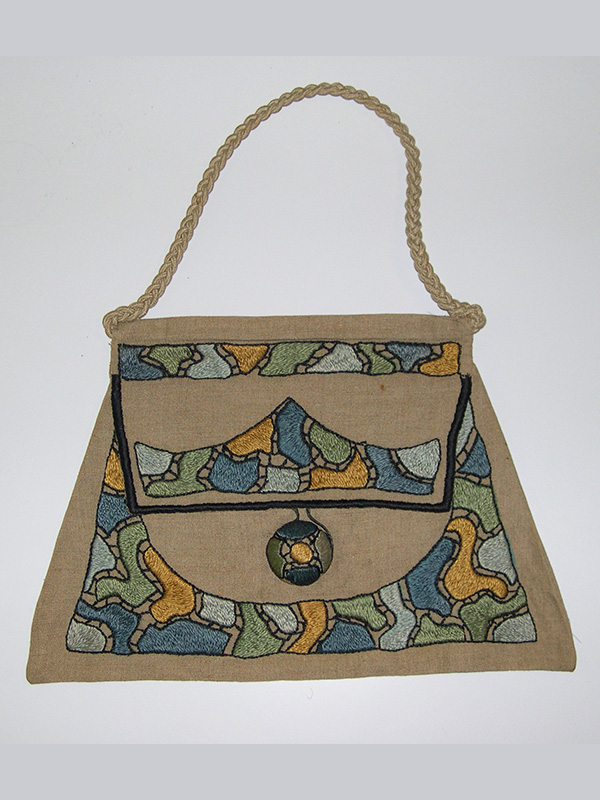 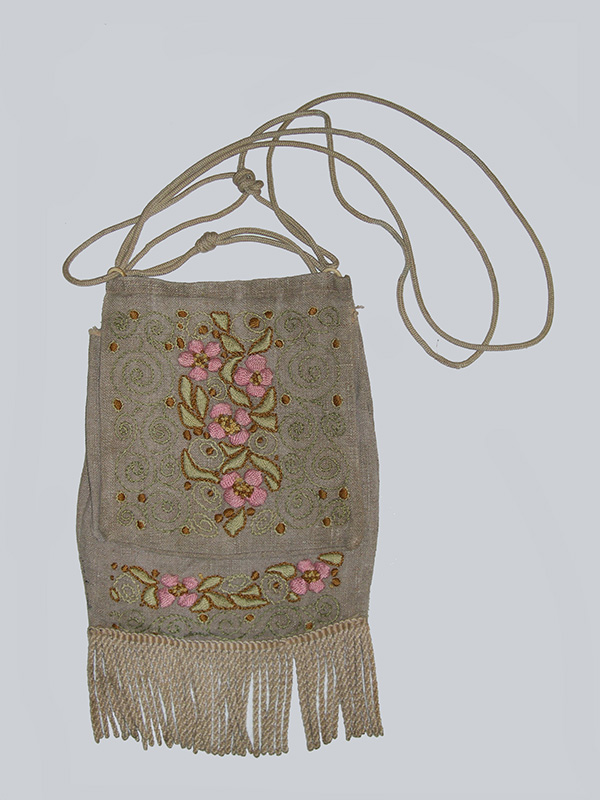 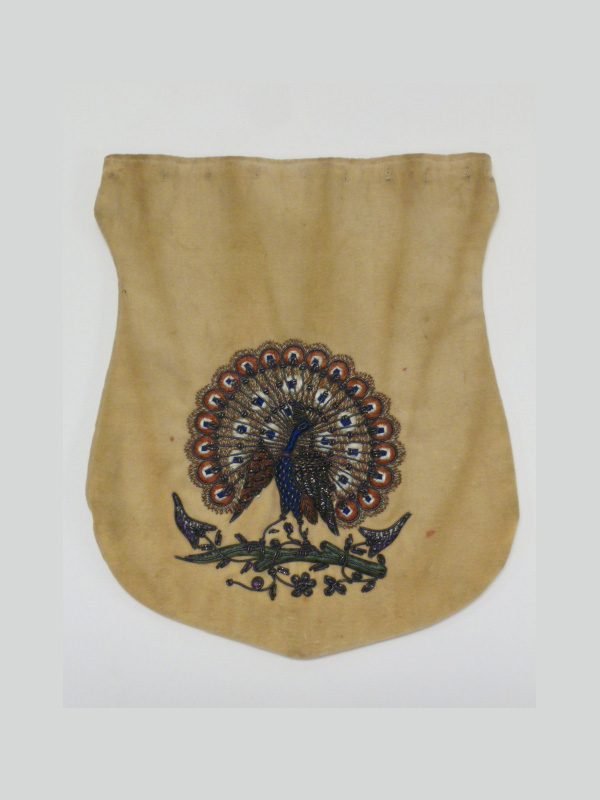 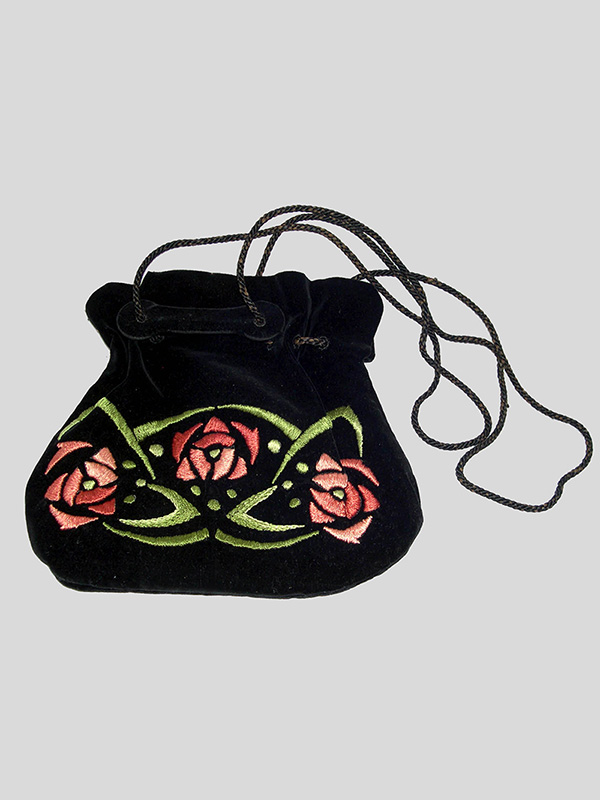